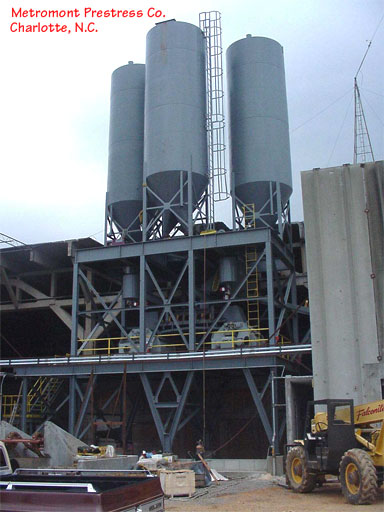 2000Click on a thumbnail to see the large photo.

This project is a good example of an extensive retro-fit. The Metromont, Charlotte plant had an existing aggregate bin set that was in good shape and needed to be retained.
The existing bin set was fitted with individual weigh hoppers, an extra two compartment bin set was added as well as an entirely new mixer platform for two SIMEM MSO2500 Twin Shaft mixers.
Three new 100 ton powder silos were placed on top of the mixer structure to allow Metromont the use of different types of cement for the architectural pre-cast products they produce.
Last, but important to the operation, an interface was created between the mixer discharges and the bucket shuttles provided by a German manufacturer. The bucket shuttles provided the means to pick up pouring buckets with the plant overhead crane system.